Continuing with my ‘Oscar Project’ in my spare time. For more of these, and a bit more in the way of an explanation of where I’m headed with this, check out this link.

I’ve been spending most of my time working on the latest ‘Who Was’ book, and various small projects that I’m not quite ready to share for one reason or another. Meanwhile, in my spare hours, I’m continuing to work on my ‘Oscar Project’ (for more information on this, see this link). Here is the ‘1934’ page.

I’m currently working on sketches for another ‘Who Was’ book, but in my spare time, I’m continuing to be obsessive about this current ‘side project’, which I alternately think is either a great idea, or a colossal waste of time, depending on the mood I’m in when you ask me. If you are interested, look in the menubar in my portfolio under ‘porfolio:personal work:oscar posters’, (or just follow the link) and I’ll try to be a little more expansive on where I think I’m going with this. I tried something a little different with the ‘nominees list’ (below), giving a ‘hollwood walk of fame’ border around the text block. 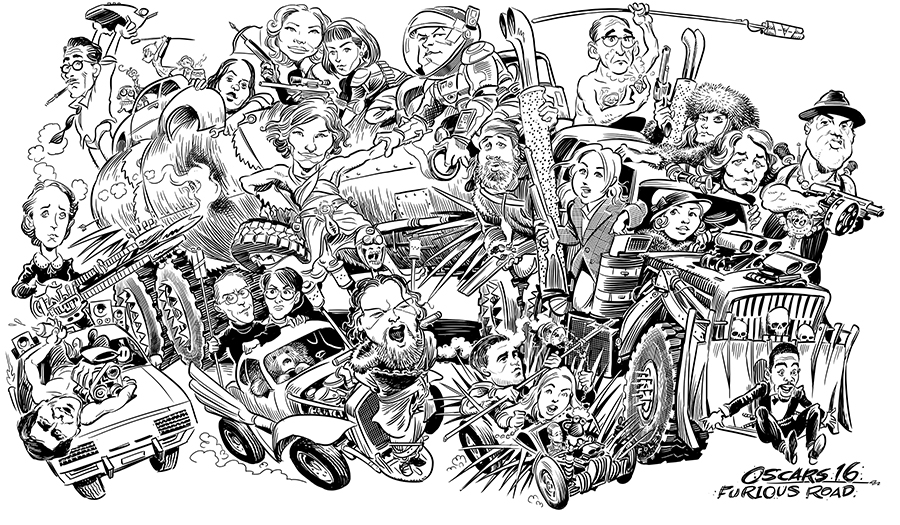 Well, it is that time of year again. Every year, my brother, who owns a restaurant on the north side of Chicago, hosts a ‘Oscar Viewing Party’ (and before he owned the restaurant, it was held for many years in his home). Starting in 2004, I began doing an annual ‘Oscar Nominations Caricature Poster’ as a gift to him, and have kept up with it now every year for the past 12 years. I was seriously doubting whether I was going to have time to finish one this year, due to deadline crunches, but I was just too geeked about the concept, and somehow managed to create time to work on it after hours. Anyhow, here it is: #12 and ‘double sized’ from the format of years past, and includes every Actor, Actress and Supporting nominations and represents in one way or another each of the Best Picture nominees and a tiny nod to each Best Animated Feature film. (Click on the image above to see a larger detailed version)