One of a series of illustrations I’m doing for an upcoming book project. More to come later in the week.

It’s been five years since I’ve completed an animated film. The reasons why have a convoluted history. Going back around 15 or 20 years, I first discovered a hidden feature on the illustration program I was using at the time for my work. Corel Painter, along with its many fine realistic brush features, had, in an earlier version, a primitive ‘animation feature’. The feature wasn’t much more than the ability to use multiple onion skin overlays to see the progress of your animated drawing over several frames, and then to play back the animation instantly to check your progress. I did several test projects, and, from 2010-2015 was able to complete 3 animated music videos for my band, the “Jukejoint Handmedowns”, also using Apples ‘iMovie’ for combining animated clips.

A computer upgrade (and subsequent upgrading of my system software), meant that I had to also upgrade Corel Painter, who had, in the meantime, dropped their ‘animation feature’ from the latest version of the software. I have been playing around with various alternative animation software platforms in the past five years, but nothing had really clicked with me, the way that the original Painter tools had.

During the recent pandemic slowdown, I spent some time learning how to use Adobe After Effects and Adobe Character Animator, and put together the above film for our upcoming album release. I had a lot of fun learning new techniques, and stretching my horizons. Each scene was a new challenge, and led to new skills, and have learned even more since its completion. So stay tuned for more.

Normally, I enjoy the experience of ‘dropping into the zone’ when illustrating. (you lose track of time, become engrossed in the act of drawing, almost a zen-like out of body experience) Unfortunately, what happened today, was that I had a particularly challenging cityscape illustration to draw for an upcoming book project, and at the outset, picked the wrong file for a ‘size template’ and ended up drawing the entire thing at 600 dpi instead of my usual 300 dpi (like the rest of the 30 or so illustrations in this project). It never occurred to me during the hours I spent working on this one that it was taking twice as long as usual. I realized my mistake only at the end, and then I had to go back and redraw the entire illustration at the correct size. I hate to waste the effort, so here’s the ‘extra detailed version’, and I’ll be posting more samples from this book next week, along with the ‘redo’. 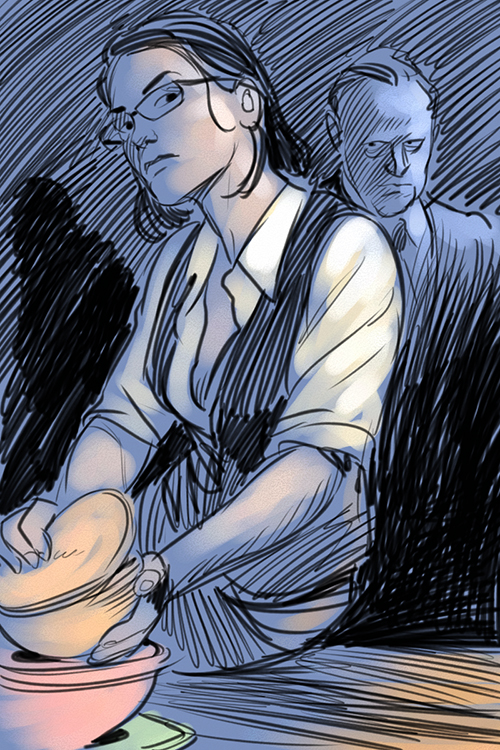 Sometimes I like to show what my rough sketches look like, especially if they turn out nice like this one today for the Chronicle. I got a job from them yesterday with a longer than usual deadline, but, as I’ll be out of town around the holidays, I’m ending up doing it at the usual pace, with the finish due after the weekend.

With the launching of my new website facelift, I’ll be moving my blog here to be integrated into the site. If you are interested in looking back over the past 25 years (and beyond) you can still visit the old blog (the “illustratorium”), which I’ll leave intact for now, but will likely be moving lock, stock and barrel over to this site eventually. Check in here for updates, news, latest projects, rough sketches and other items of interest.