Finished up an ABA illustration this morning. While working on it, I saved various ‘in progress’ versions to share here, and give a little insight into my working methods. Below is step one, the rough sketch (after showing it to the AD, she suggested making some of the ‘arms’ clad in orange prison garb, which I did in the final version)

The first step I usually take is drawing the entire thing as a black and white scratchboard, and then the next step is coloring and texturizing some of the solid black lines (which helps to soften up the hard edges and gives a little more depth). Then the final step is the actual coloring of the piece, which I usually do on a separate layer, usually in watercolor, or something similar. I usually leave any lettering until last, and in this case, added the wording “Habeas Corpus” using photoshop.

Here’s an old one from 2012, from the Dover “Political Circus” book.

Worked up a rough sketch this afternoon for a personal self promo illustration. One of the few upsides to 2020 has been the discovery of the Criterion Channel. I’ve long been an old movie buff, and I’ve been enjoying the programming this subscription service has been offering this summer. This past month I’ve been wallowing in old Joan Crawford movies.

This past year, I’ve also started doing a lot more of my rough sketches in a blue pencil (well, digital blue pencil, anyways). It seems to take me back to my days as a paste-up artist in the 80s, using the non-repro blue pencils. Though I only do this for personal projects, as I don’t want to confuse my clients (“this is fine, but are you planning on doing it in blue?”). 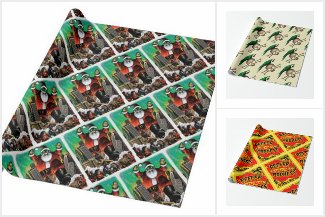 Holiday shopping season is quick approaching, so I’ll be highlighting some of my reprint merchandise from the Zazzle store over the next few months.

Working on rough sketches today. Above is an upcoming illustration for the ABA, and below are some revisions to the AHMM cover that I submitted earlier in the week, after some comments from the editors. Will be going to finish on probably both of these next week.