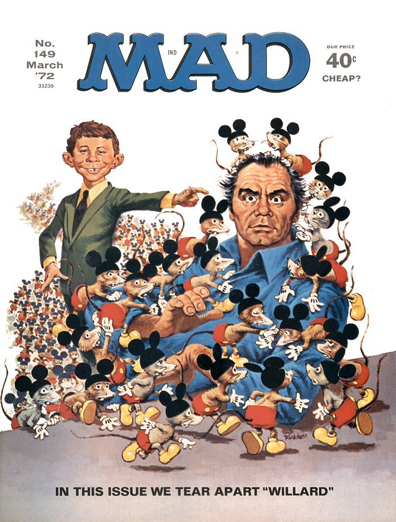 More than any other influence, I would have to credit Mad Magazine with single handedly steering me towards a career as a professional illustrator.

I was home sick from school in March of 1972, ten years old, and it was my Mother’s habit to bring us home a magazine to cheer us up and give us something to do while sniffling on the couch. Usually it was ‘Jack and Jill’ or ‘Highlights’, but this time she brought home something drastically different. Issue 149, March 1972, Mad Magazine (featured movie satire was ‘Willard’). It was like an electric shock after all that sanitized entertainment that I had been exposed to previously. Spoofs of advertising where the product was exposed as worthless, movie and tv satires where holes were poked in flimsy plotlines and pompous acting egos, politicians portrayed as buffoons or worse — but what really grabbed me was the art. The mix of realistic techniques with cartoon imagery, the odd square speech balloons, even the fact that the interior was completely black and white (where was the color from my usual kiddie fare?). To the ten year old mind, it just screamed sophistication and forbidden adulthood tastes. 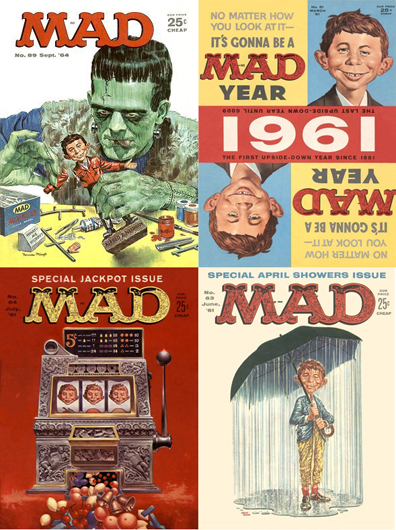 Around this same time, I also discovered a stash of old back issues of the same magazine in my uncle’s closet at my Grandparent’s house (my parents fearfully thinking I had discovered the ‘OTHER’ magazine in my Uncle’s closet, namely “Playboy”), dating from the early to late sixties. I’m sure my parents were worried about me, sitting for hours up in that dusty attic pouring over and over these ‘cartoon books’ instead of being outside and taking part in more healthy pursuits, but as far as I was concerned, I was in heaven. They so wormed their way into my head, that, thanks to the internet, I can now recreate the cover images for the entire ‘Mad Magazine Stash’ that I found in that long ago closet. And they still have the power to enthrall me to this day. 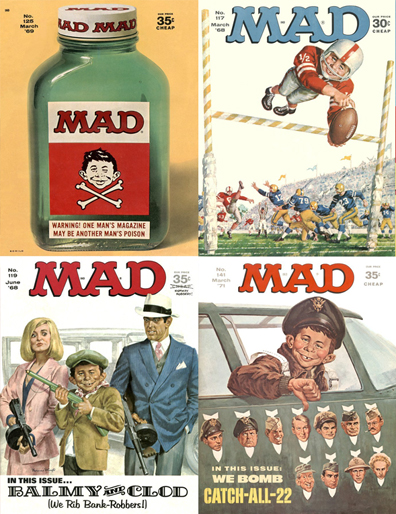 My allowance around this time was 50 cents a week. The latest issue of Mad was 40 cents at the time (and rapidly rising thanks to inflation) and as far as I was concerned, it was priority number one for several years after that first issue. (later, when I became desperate between issues, I would also pick up the occasional issue of Cracked or Crazy magazine, which was a poor substitute) Ironically enough, it was buying a subscription that eventually ended my love affair with the magazine. Becoming so easily provided every month in the mailbox took all the fun out of the trip to the newsstand. Or maybe I was just getting older and more sophisticated in my tastes (National Lampoon was starting to look more and more interesting on that newsstand, especially with the occasional photo funnies featuring naked women). Below are a sampling of the issues that still have the power to send me back in time in a rush of recognition. 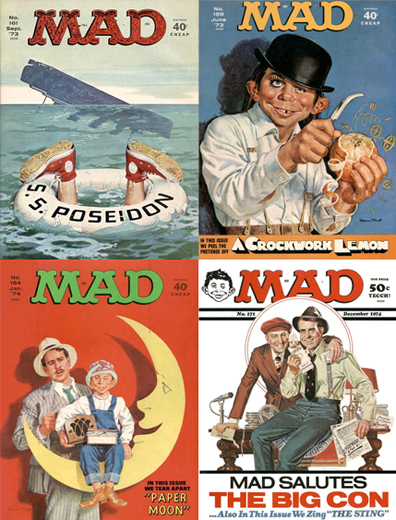 After a while, I developed a set of favorite artists in this magazine and looked forward to discovering further examples of their work. I especially liked the color cover illustrations by Kelly Freas and Norman Mingo.

My first artistic fascination was with Don Martin, who regularly drew several single page cartoon panels in each issue. His distinctive style of flop footed characters with elongated faces and always punctuated by hilarious sound effects were the first to inspire me to try and duplicate. After a while, though, they started to pale in my estimation when the limits of his stylistic straightjacket became more and more obvious. But his work still occupies a soft spot in my heart for being the first to grab me. Another artist who grabbed me early on, and continues to fascinate to this day, was the movie satire caricature work of Mort Drucker. I am constantly amazed at his skill at capturing a likeness with seemingly a few lines and squiggles. The more I study his work, the more impressed I also am with his skills at drawing hands, figures, perspective, layout and design, those amazing crowd scenes — and all the time, not only fighting with those ungainly ‘speech boxes’ at the tops of the panels, but also managing to throw in the trademark ‘Mad background jokes’ that constantly hide in the corners. Oddly enough, I was never all that thrilled to see his color work on the cover. The color seemed forced, and seemed to diffuse the power of his masterful line work. In fact, I am so indebted to Mort Drucker’s influence, that I may devote an upcoming blog entry to his work alone. Thanks to reprints of the ‘Early years’ of Mad Magazine, I also discovered the wonderful work of Bill Elder and Wally Wood. I am constantly amazed at the amount of ‘background jokes’ they would cram into each and every panel.