There are some days where most of my workload consists of preliminary sketches for future finished projects. I sometimes like the raw, quick and dirty feel of some of these rough pencils. Here’s a few from my current workload, and if you stay tuned in the future, I’ll likely be posting the final versions for comparison. Above a rough for Hudson Valley Magazine, and below a couple roughs for an upcoming book for Penguin, and below that a rough sketch for a River Styx assignment.

ADDENDUM (Wednesday): And another one for Alfred Hitchcock’s Mystery Magazine:

Continuing to work on sketches for another Penguin ‘What Was’ book, and gearing up to get started on several books for MacMillan in the coming weeks (and complicated by several trips to the hospital over the past two weeks dealing with my wife’s health issues). This morning I found time to finish some artwork for an upcoming reprint of ‘Little Women’ for Dover (pictured above). I may have a few more samples of quick turnaround work to share tomorrow afternoon.

The ‘author copies’ for this coloring book from Dover just arrived on the doorstep this morning. I’ll get around to sharing the art for this book sometime this summer. Big thanks to my Uncle Ken for the inspiration, and for helpful suggestions as to what cars I should include (and backdrops, like the Flint Planetarium). Available on Amazon. 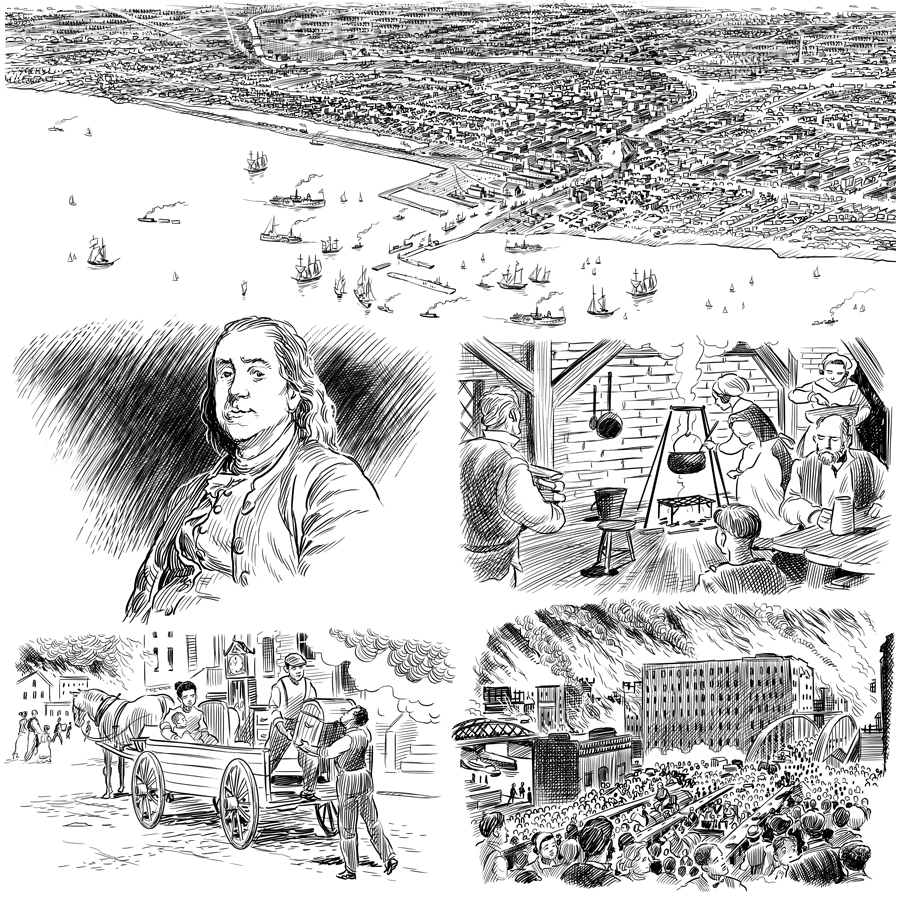 Another in the series of ‘What Was/Who Was/Where Was’ series of young reader books for Penguin, was “What Was the Chicago Fire?” from early 2016. This was the tenth book in this series that I illustrated the interiors for, and, when it was first proposed to me, I was a bit reluctant. Buildings are not my favorite thing to draw, and I had turned down one assignment the previous fall from the same client for that very reason, but at that particular time I was desperate for work, so I gritted my teeth and said “why not?”.
This one ended up being one of the most challenging of the books, for the aforementioned reason, and also the fact that it was filled with numerous crowd scenes, overhead city scenes (both prior to the disaster, during, and the aftermath). However, for the very same reasons, due to its challenge and complicated nature, I believe this book may have been a turning point in regards to my outlook towards these assignments. I learned an awful lot during the course of this project, both in technique and approach, and I’ve started embracing the pen and ink style, and more importantly, embracing the ‘process’, rather than just enduring it. I think this book was one of the best of the series that I’d done so far (and other difficult ones would follow), and I was informed recently that this book has been nominated for a ‘book of the year’ award by a Chicago area educators society (more news on this as I hear more).
I’ve share a few samples from this book in the past, but this is the first time sharing all 80 or so of the illustrations from the book. 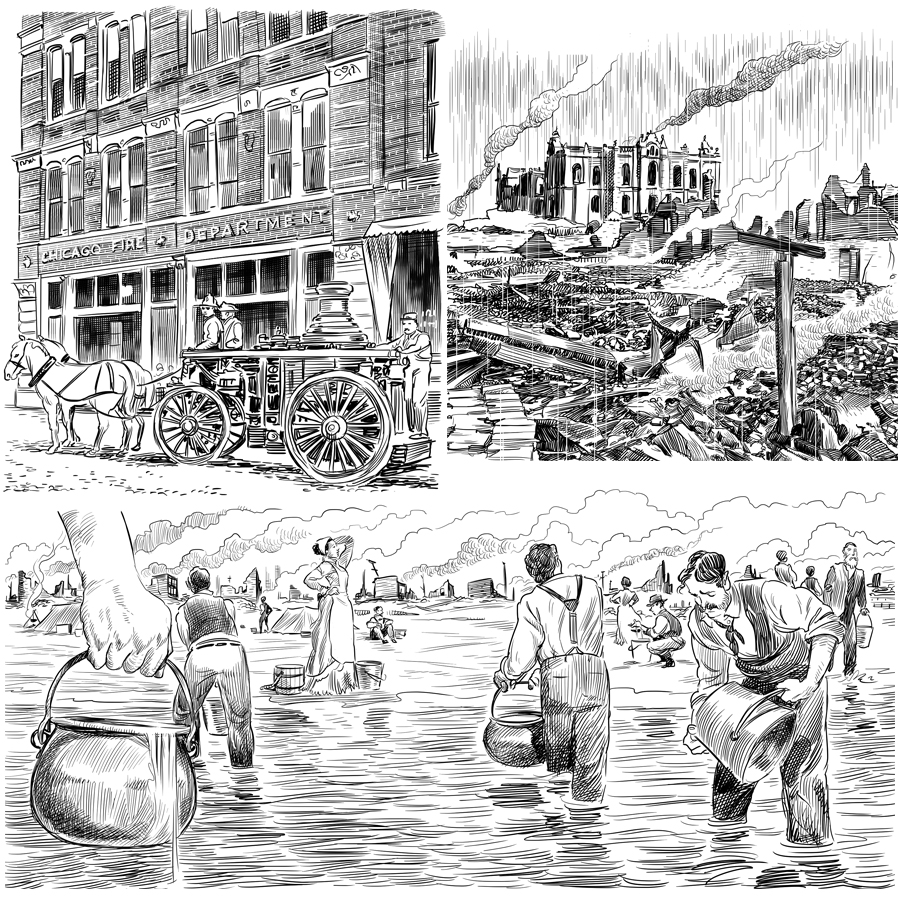 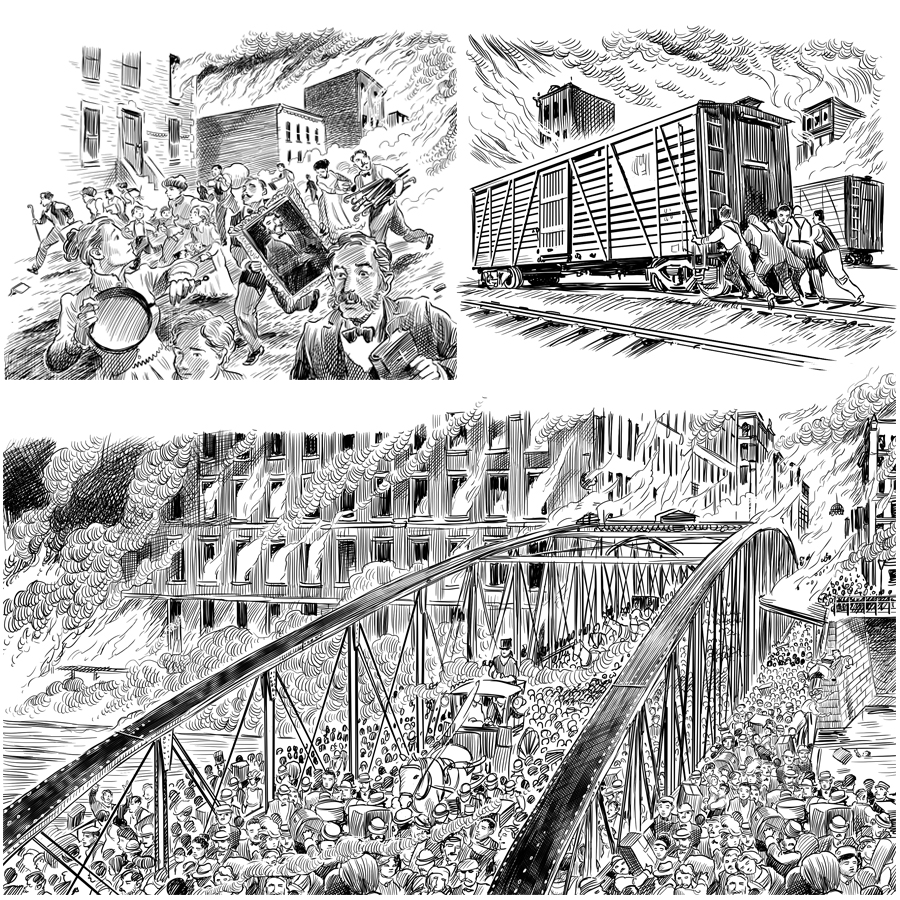 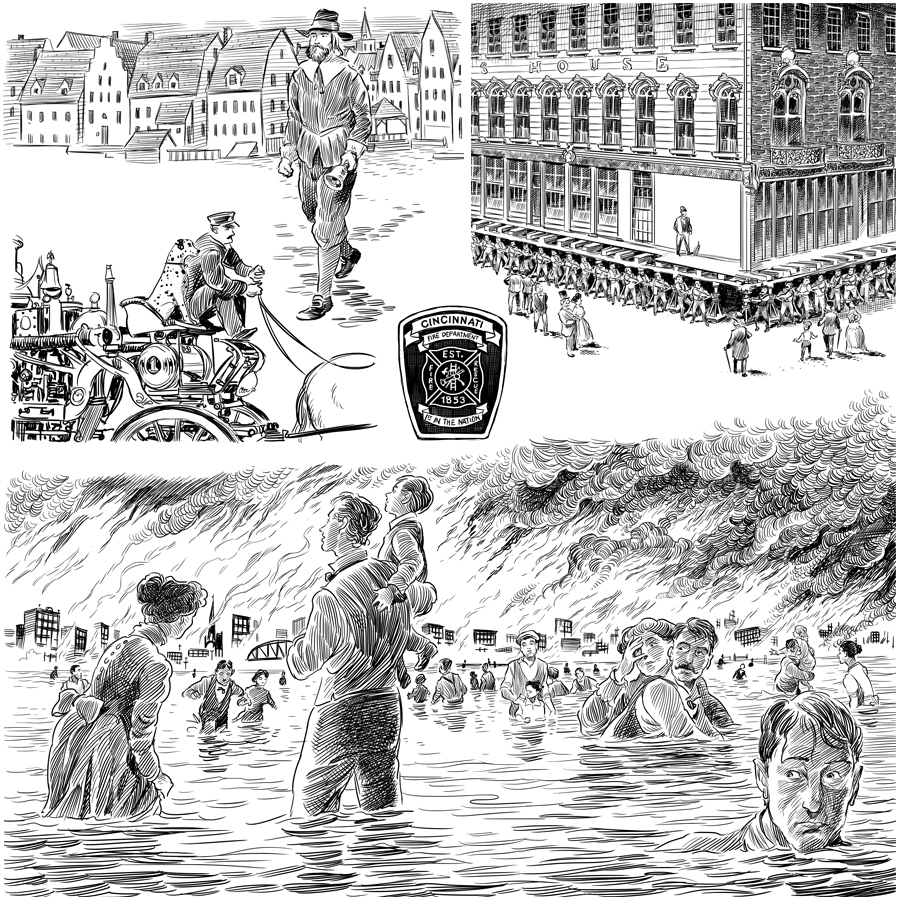 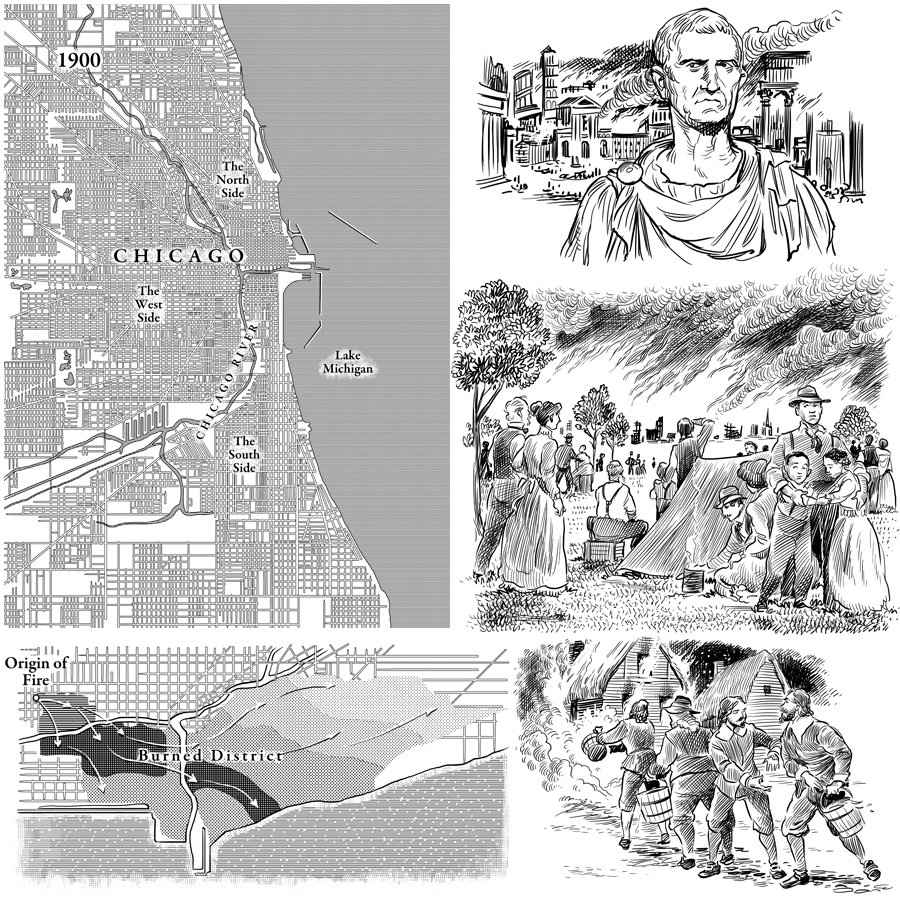 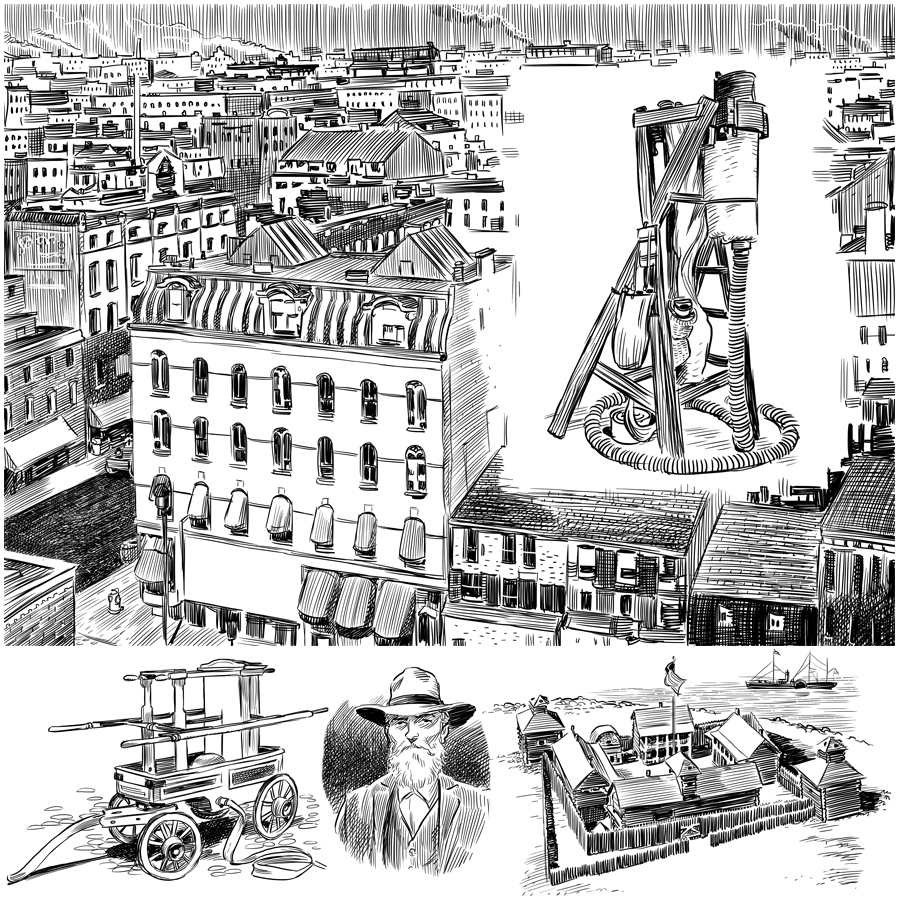 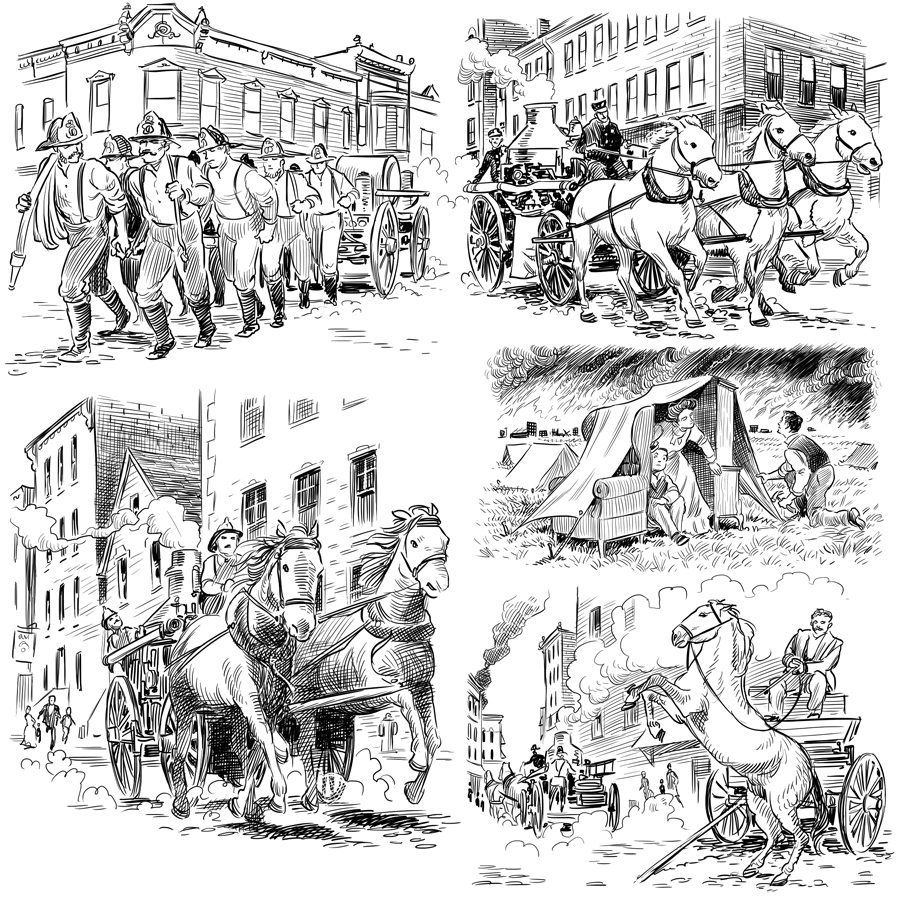 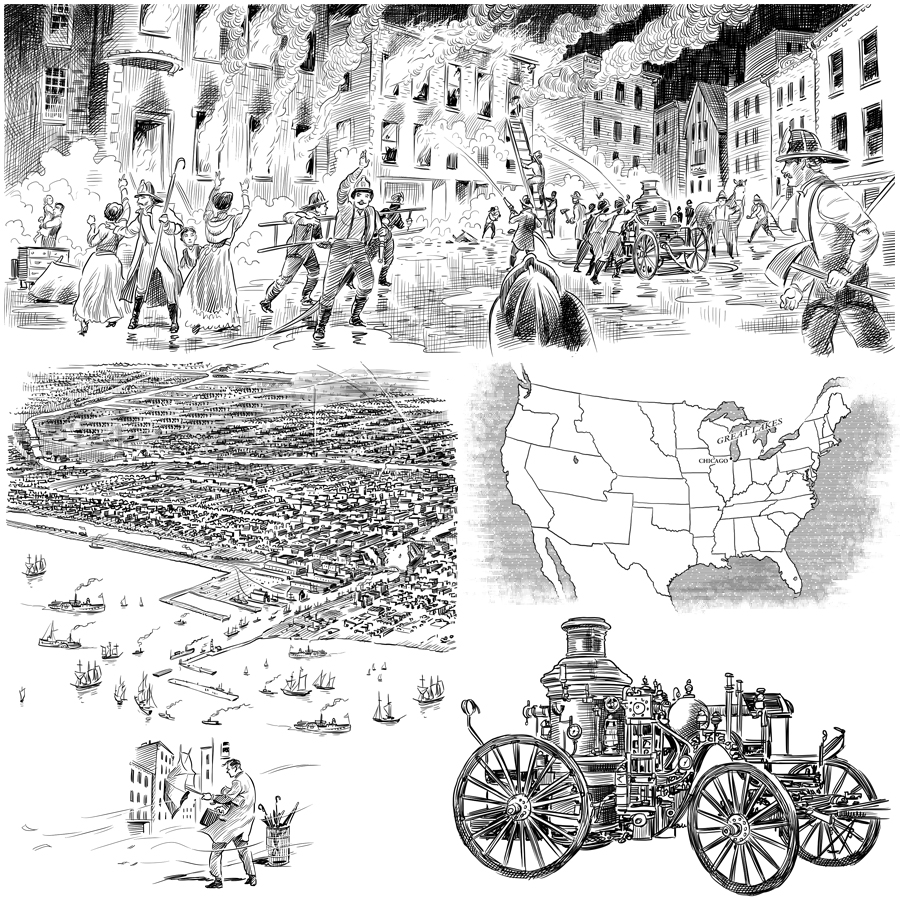 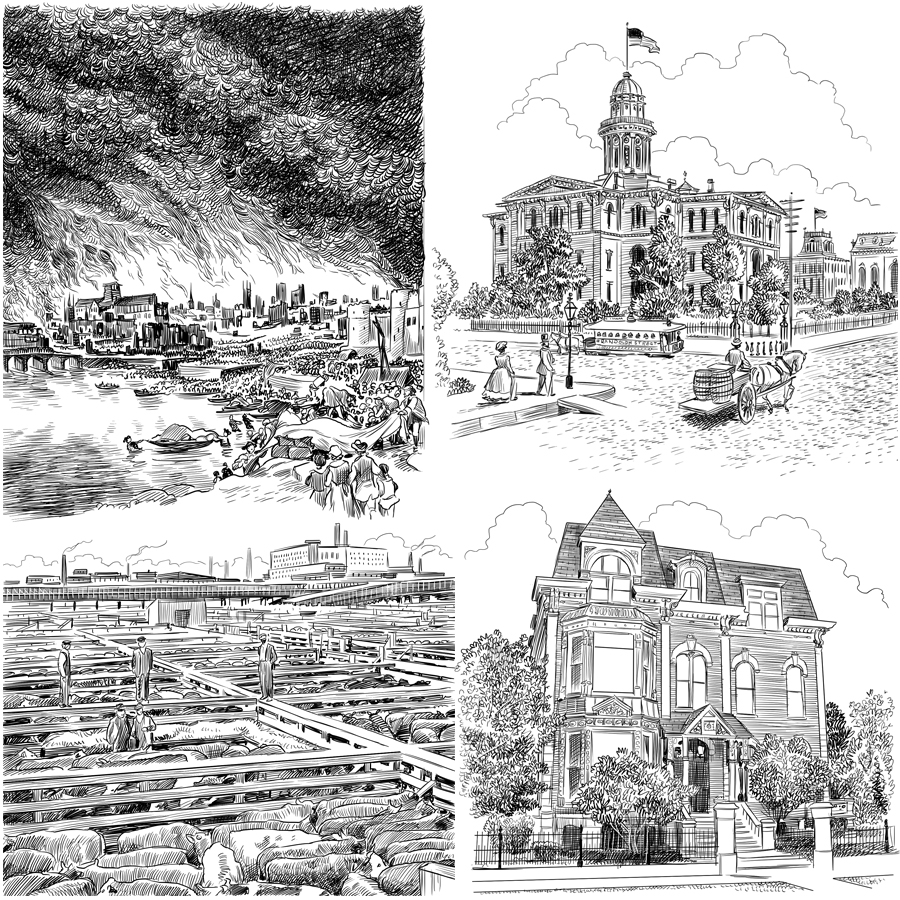 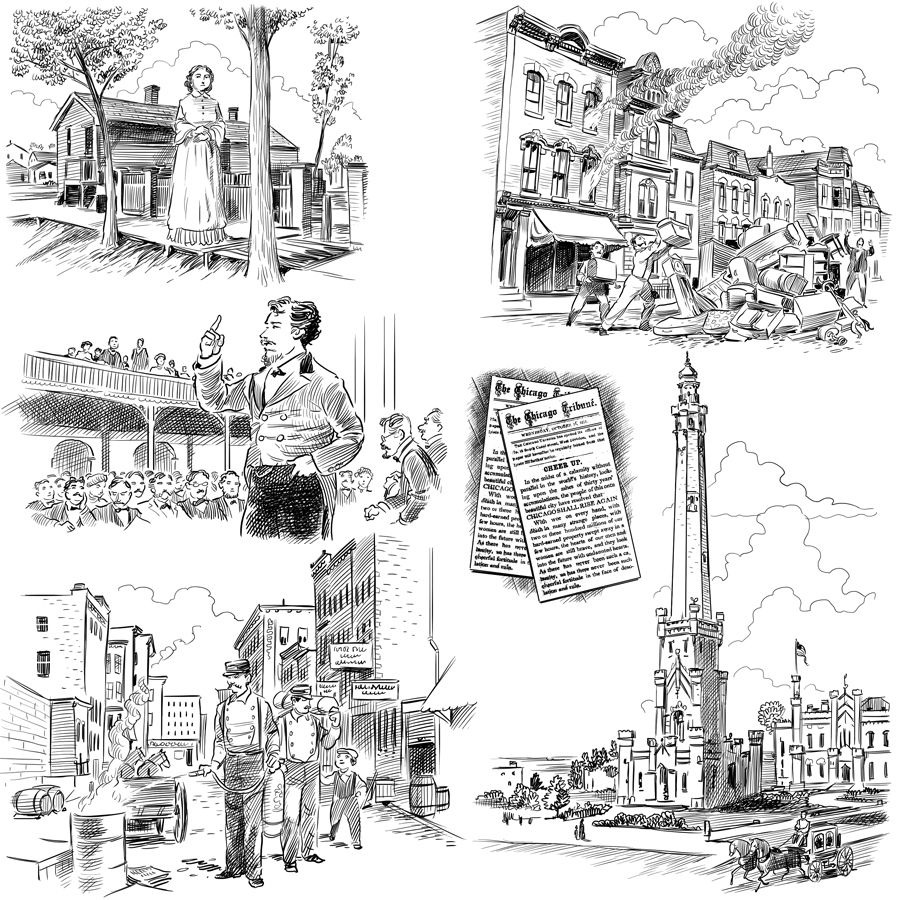 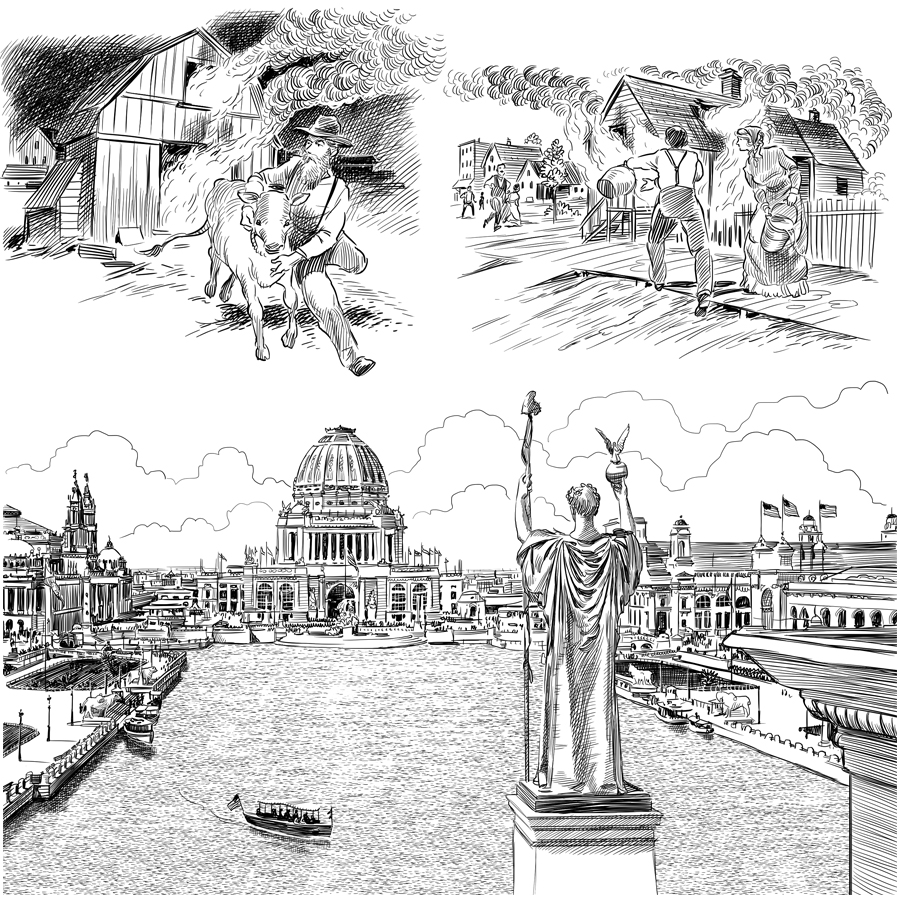 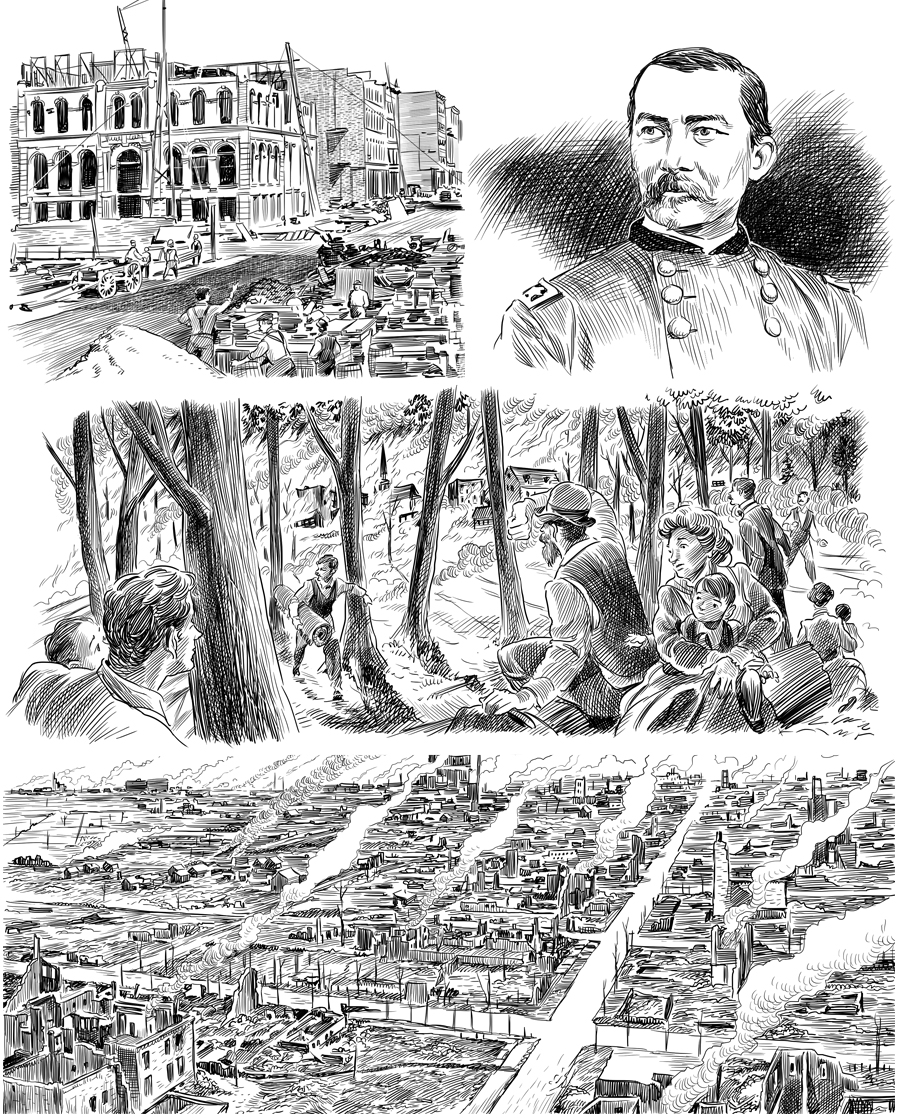 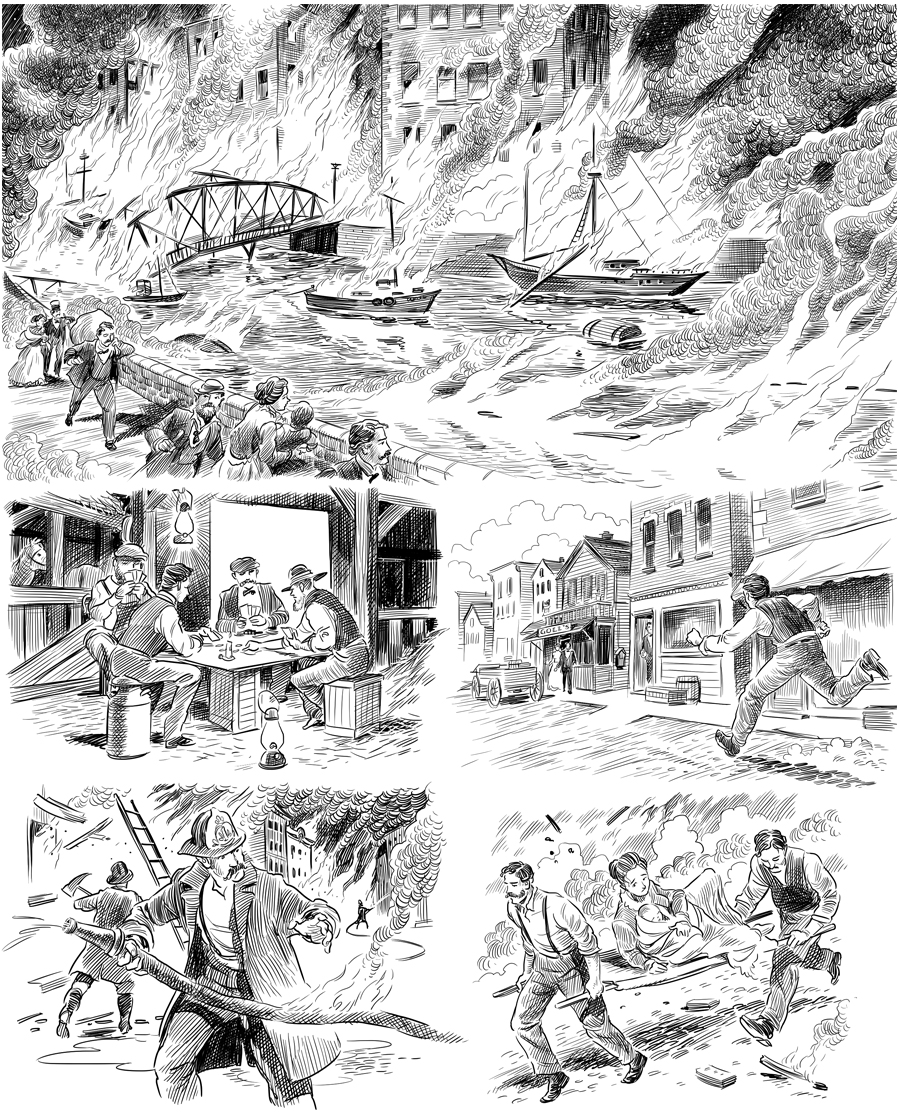 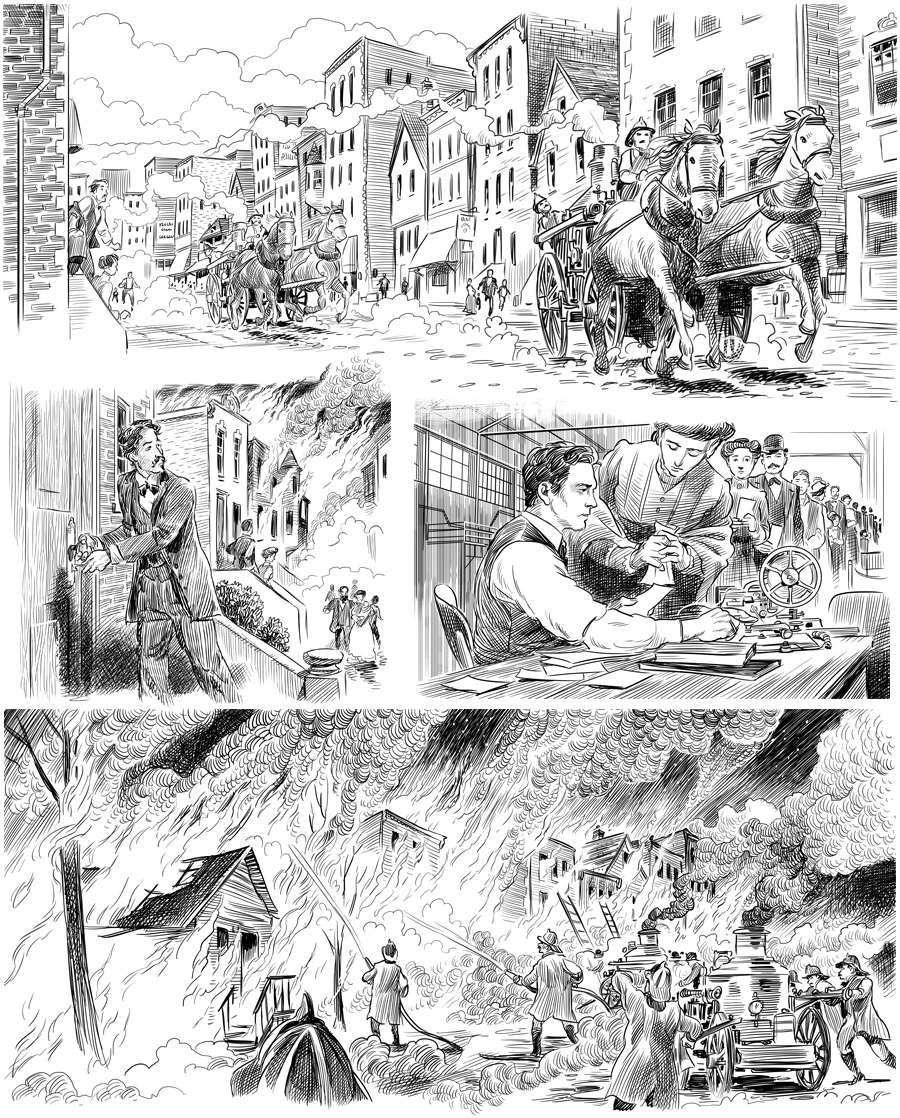 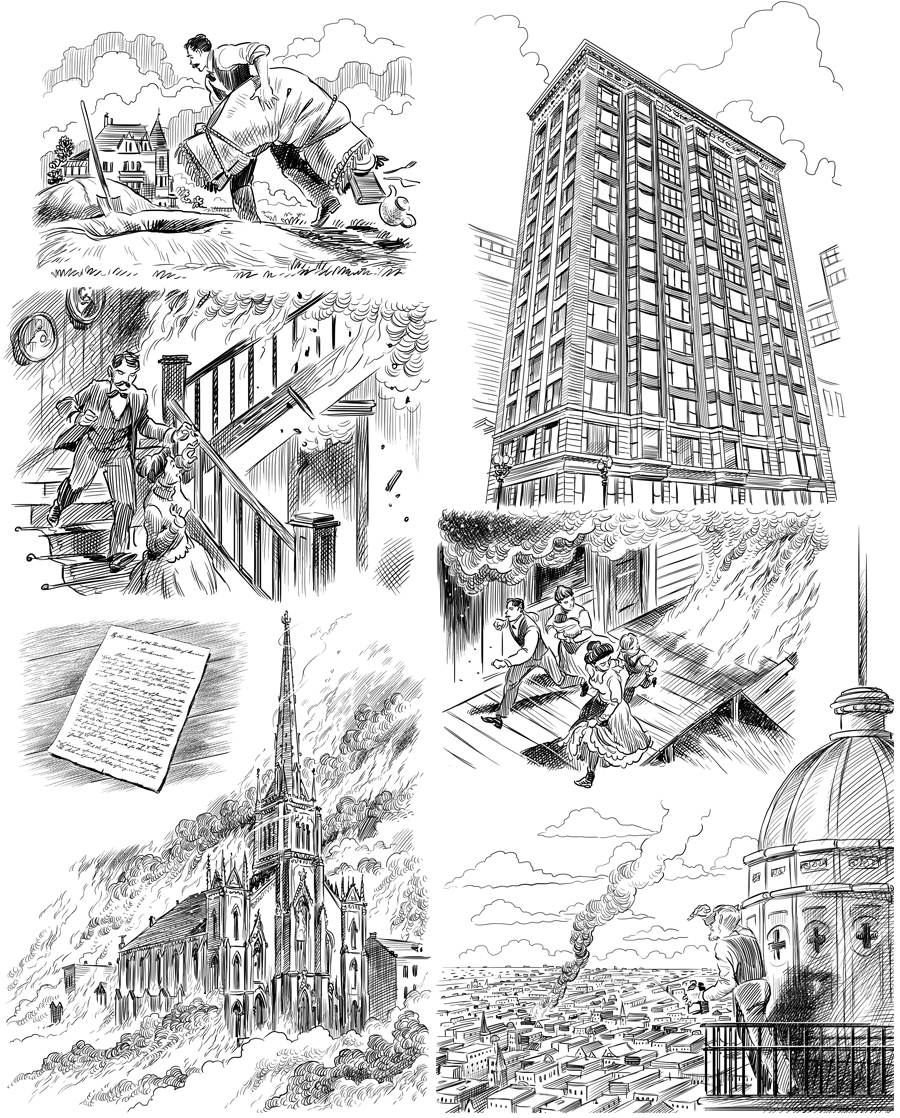 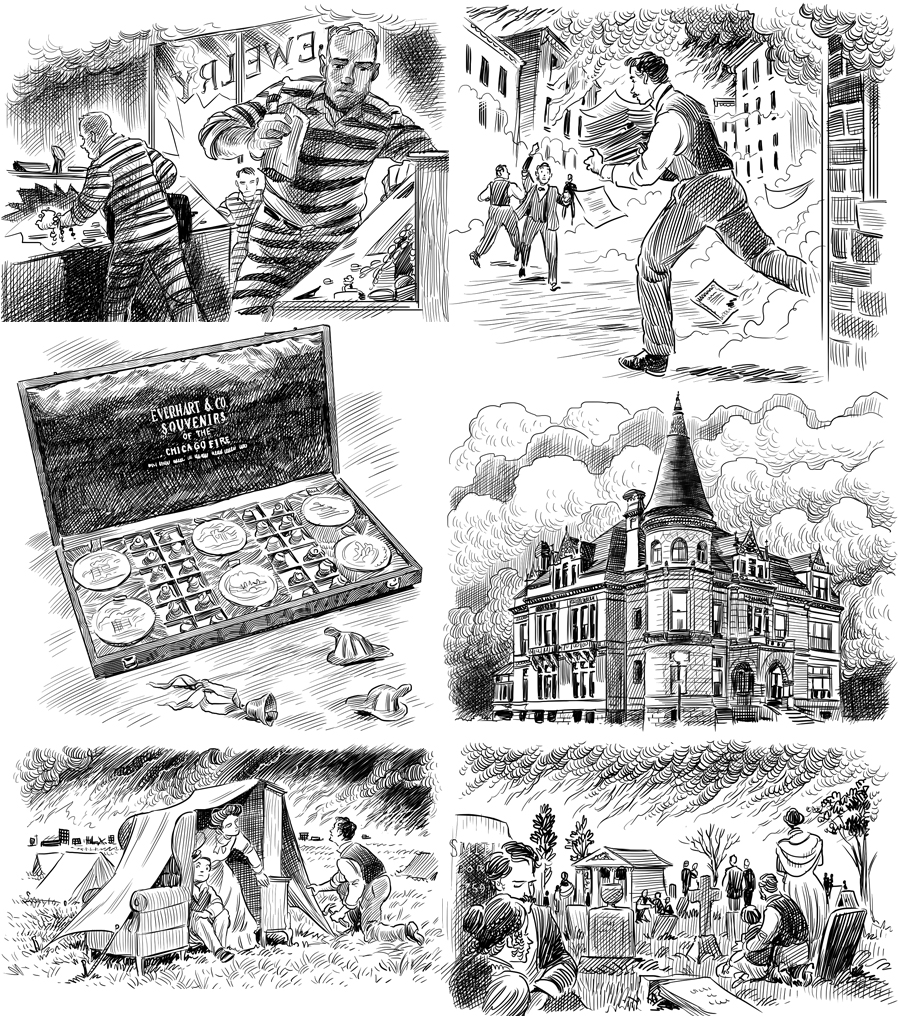 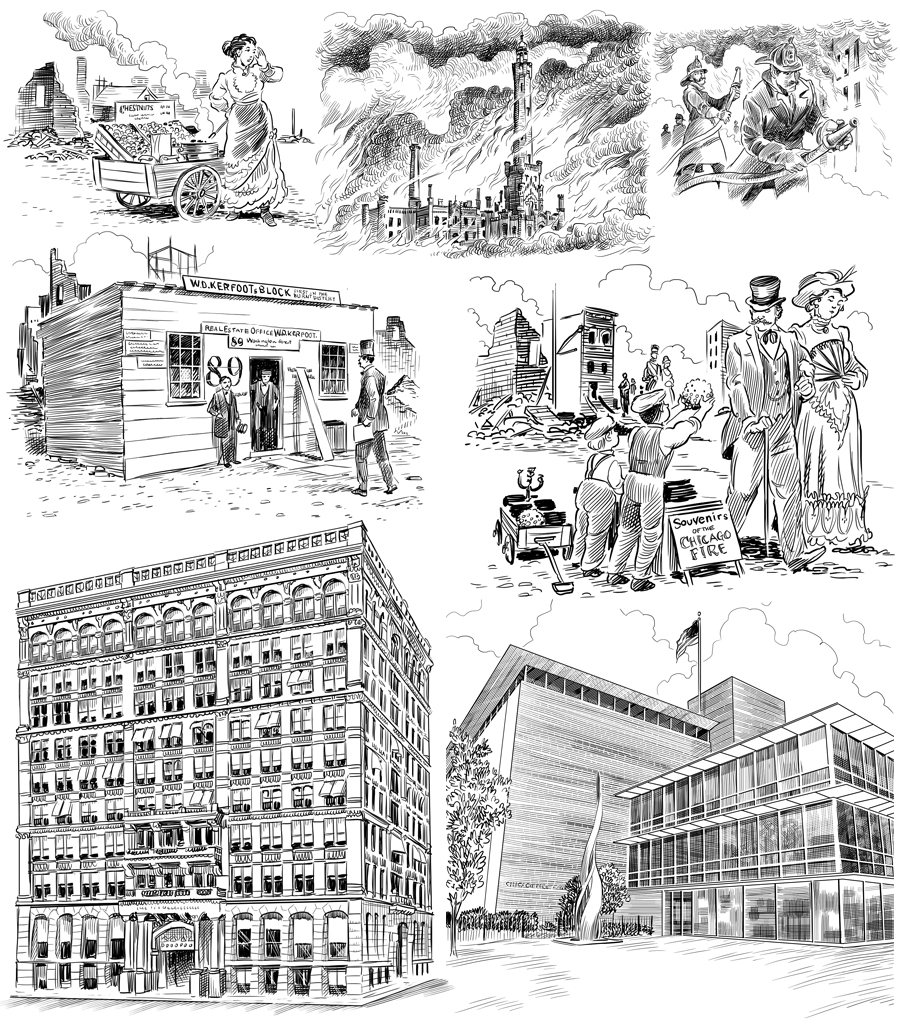 Starting work on the new Penguin “Who Was” project this week, and also finishing up a few cover assignments for Dover’s ‘Evergreen Classics’ library. Above is the cover art for “Moonfleet”, and below is the art for “Huckleberry Finn”. If I find the time this week, I’ll share some art from a previous “Who Was” project from a few years ago, so stay tuned.