Along with the old back issues of ‘Mad Magazine’ that I found in my Uncle’s closet back in the early 70s, I also found a stack of back issues of various ‘Hot Rod’ Cartoon magazines. I wasn’t nearly the ‘car nut’ that my Uncle was, but I certainly could appreciate the goofy artwork. I always found it fascinating how meticulously detailed the illustrations of the cars were in these publications, and then how slapdash and amateurish the drawings were of anything ‘non auto related’. My exposure to these magazines also led to an interest in various ‘trading cards’ a few years later. I’m not really sure where Ed Roth fits into all this, but I’m guessing, based on how similar all these designs and concepts are, that his was the original, and everything else fed off his designs. I recently came across a web site devoted to ‘Odd Rods’ cards that seem to be the images that stir the most memories for me, although there seem to be several competitors and knock-offs of the same general idea. A package of these cards would come with probably 4-7 cards and a stick of rock hard bubble gum that would break and pierce your cheeks and gums, and all for the paltry sum of 5 or 10 cents. With my 50 cent allowance, this would leave me plenty for a can of pop and a bag of green onion potato chips for the bike ride home. I was also endlessly fascinated by the ‘Wacky Packages’ cards that started coming out in the early 70s (pictured below), which almost seemed like a ‘trading card’ version of ‘Mad Magazine’, with similar irreverent sensibilities. If they were aiming to corrupt the youth, they certainly succeeded with me. I would later find out that the artists who worked on these Wacky Package cards were Art Spiegelman (later of ‘Maus’ and ‘Raw’ fame) and Norman Saunders (a well respected journeyman illustrator nearing the end of his career). I likely missed the initial run of these cards, but was obsessed with buying them during their 1973-76 heyday. My allowance also disappeared through the occasional issue of Cracked or Crazy magazine when I couldn’t wait for the next issue of Mad to appear. The art wasn’t nearly as awe inspiring in these, but I still diligently pored over each issue I got in my grubby little hands, and spent a lot of time copying styles and recreating my own crude versions of movie satires and cartoon panels in my own pads of drawing paper (another expenditure, but one that I was usually able to talk my Mother into providing for me without having to dip into my own funds). I was mostly enamored of artist John Severin who seemed to be the poor man’s ‘Mort Drucker’ for these 2nd rate funny books. Kelly Freas (who did a lot of work for Mad Magazine in the sixties) would contribute cover illustrations to some of these magazines as well. I would later discover that Daniel Clowes got some early work from Cracked magazine (but was probably after the period where I was reading it). 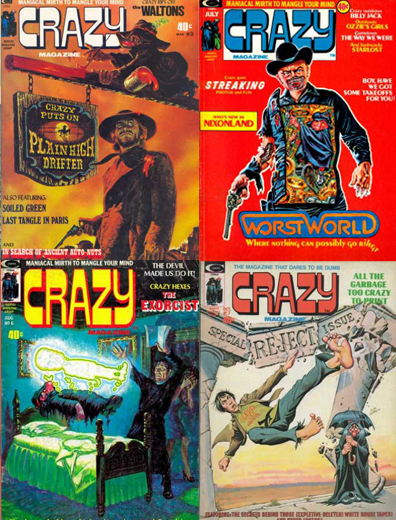 Gradually, I started noticing the National Lampoon hovering around the edges of the ‘humor magazine’ section of our local drugstore newsstand. From flipping through issues at the store, I was able to determine that there was no way my parents would allow this stuff into our house. I was fascinated by the fact that this magazine used actual photos for its comics (often featuring women without clothes on), and I was also struck by how the magazine layouts had more sophistication, more like a ‘real magazine’ rather than a ‘cartoon book’. This magazine had more of a ‘design’ and ‘subversive sensibility’ influence on me, rather than any illustrative influence (even though there were several memorable illustrators working for the magazine over the years). 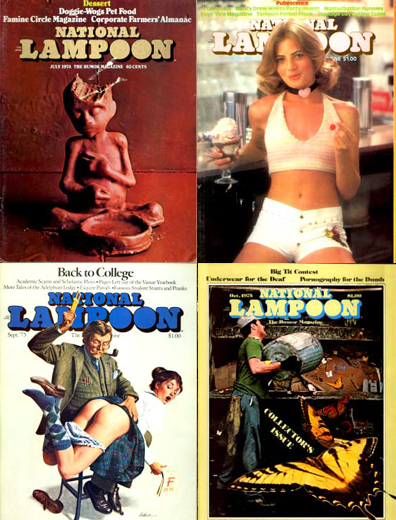 If my parents ever lost track of me at a large store or mall, you could almost always count on finding me hanging around the newsstand, sneaking peeks at the magazines.